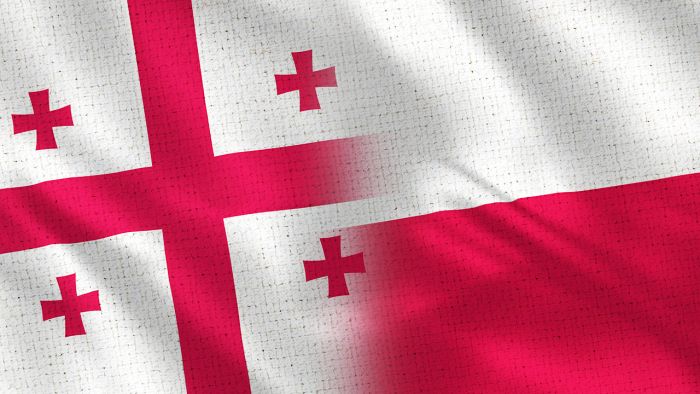 It is quite difficult to name a country in Europe, which is more important for Georgia than Poland. Both states have a deep political, economic, historical, and cultural bond. In this article, I will try to focus on the description of shared history between these nations.

Early relations: According to historical annals, first crossing between Poland and Georgia took place in the late 15th century, when the king of Kartli – Constantine I sent the diplomatic mission to Poland. The main aim of this quest was to convince the Polish king – Alexander I Jaigellon to form a military coalition against the Ottoman Empire. Alliance did not constitute, though countries established the first diplomatic connection. In the following centuries, relations between Poland and Kartl-Kakheti (Eastern part of dismembered Georgian kingdom) intensified. According to eminent Italian traveler – Pietro Della Valle (1627), there were 3 independent principalities in Western Georgia: Imereti, Guria, and Odishi (Samegrelo). He emphasized that principalities recognized the sovereignty of the Ottoman Empire over their lands to maintain peace and order. However, they did not fully subdue to the Ottomans and did not provide the Turkish army with the free passage over their territories. Pietro Della Valle pointed out that the Polish king preserved friendly relations with them. There were active trade links between Poles and Georgians. According to Valle, Polish monarch was fully aware of Georgia’s strategic location. He considered that one day if Europeans had decided to attack Istanbul, Georgia would have been a beneficial bridgehead to launch military intervention to the Ottoman lands.

In this period, the most famous Georgia-born Polish diplomat was Bogdan Gurdziecki, who was sent by the king Rostom (1648-1656) with the special diplomatic mission to find allies against Ottomans. In 1668, the king of Poland and Grand Duke of Lithuania (I Rzeczpospolita) Jan Sobieski sent him to Iran. He was appointed as a permanent resident. Gurdziecki was trying to deepen political and economic cooperation between Poland and Iran. In the late 17th century, the only country in Europe that could deter and balance Istanbul, was the Polish-Lithuanian Commonwealth. Sobieski’s particular object of interest was Georgia, which could join the anti-Ottoman alliance and strengthen Christian positions in the Eastern periphery of Europe. Gurdziecki was a key figure in the victory of United Christian forces against Ottomans in 1683.

In 1795, after the third partition between Austria, Prussia, and Russia, the Polish-Lithuanian Commonwealth (I Rzeczpospolita) collapsed. In 1801, Russia also annexed the Kartl-Kakheti kingdom. From that point, the main goal of both countries was to regain national independence. There were many uprisings in Poland and Georgia against the Tsarist regime, which were brutally oppressed by the Emperor of Russia. Dissident movements especially activated in 1860’s. Russia slaughtered around 20 thousand Poles by the course of January Uprising (1863). In Georgia, young people under the leadership of Ilia Chavchavadze founded the liberation movement, which aimed for the greater autonomy within Russia at first and then the complete independence.

Relations between 1918-1991: After the weakening of the Tsarist regime, Georgia and Poland regained the long-awaited independence. Georgia became independent on the 26th of May 1918, after the October revolution, when the Bolsheviks seized power and civil war broke out in Russia. Poland also regained independence on the 11th of November 1918. The architect of thePolish freedom movement and then chief of state – Józef Piłsudski had a Prometheanist vision of European security, which meant to weaken the Tsarist regime by supporting independence movements within the Russian Empire. One of the principal directions of this security policy was Georgia. Piłsudski noticed the strategic importance of Georgia. He was sure that Georgia should play a crucial role in enhancing peace and stability on the old continent. That is why Poland swiftly recognized the independence of Georgia and established the diplomatic mission in 1920. The head of the Polish mission was Titus Filipowicz, who aimed to create a Polish-Georgian military alliance. Unfortunately, this plan was deranged because of the Soviet invasion in Georgia. On the 25th of February 1921, the Russian army annexed the country once again.

After the dissolution of the First Democratic Republic of Georgia (1918-1921) the government managed to escape and established Government in exile in Paris. After the events of 1921, many Georgians emigrated to Poland. Between 1922 and 1924, many Georgian Junkers joined the Polish army and became prominent military figures. The most famous officers were ZakariaBakradze, Aleksandre Chkeidze, and Ivane Kazbegi. It is quite interesting that among other emigrated soldiers, there was Dimitri Shalikashvili, whose son – Jon Malkhaz Shalikashvilibecame Chairman of the Joint Chiefs of Staff, which is one of the highest military ranks in the United States of America. Besides that, Shalikashvili served as a Supreme Allied Commander of Europe in 1993-94.

In the aftermath of World War Two, one of the victories – the Soviet Union descended so- called “Iron Curtain” in Eastern Europe. Poland, among other Eastern European countries, became a satellite of the USSR. Poland regained independence only in 1989 when the USSR was quite weak to contain velvet revolutions. A little later, in 1991, Georgia regained independence too. Nearly two centuries of Russian dictatorship was over. But Kremlin’s aggressive intentions did not disappear.

Relations in the Post cold war era: Diplomatic relations between Poland and Georgia re-established in 1992. From this point, Poland became the key strategic ally and partner of Georgia, which cordially supports the independence and territorial integrity of Georgia, as well as the country’s Euro-Atlantic Aspiration. An apparent illustration of Georgia’s strategic importance for Poland is the National Security Strategy 2020 which boldly emphasizes Georgia’s Euro-Atlantic integration as its top foreign policy priority.

Poland fully supports Georgia’s desire to join NATO. Warsaw is the contact state between NATO and Georgia. The Embassy of Poland will play the role of Contact Point Embassy between Tbilisi and Brussels until the end of 2020. According to the ambassador of Poland in Georgia – Mariusz Maszkiewicz – this decision will significantly increase the NATO presence in Georgia and improve bilateral relations between Poland and Georgia.

Poland completely holds up Georgia’s European integration too. Warsaw supports EU’s “Open Door Policy”, which is why Poland has a quite special attitude towards Eastern Partnership countries, especially with Georgia, Ukraine, and Moldova.

Besides military and economic cooperation, there is a significant economic interest between the two countries. In 2014, Georgia signed DCFTA (Deep and Comprehensive Free Trade Agreement), which allowed the country to get access to the European market. Consequently, Georgia’s export and import to the EU have significantly increased during the last years. In 2009 Georgia’s export to Poland was $ 3.6 million, while for 2018, this number grew four times ($16million).

To summarize, we can boldly say that the Polish-Georgian bond is a clear example of extremely friendly relations between the two countries. Poland and Georgia have deep historical, economic,and cultural ties. They share universal values of democracy and human rights. There are very few precedents when geographically separated and ethnically different people establish such kind of relations. Georgia, as well as Poland, should try to preserve and further deepen this special bond in the future.

View all posts by Giga Jokhadze